Megatrends are global macro forces that will transform business, the marketplaces that they operate in, and society at large.

US author John Naisbitt first coined the term more than 35 years ago in his first book ‘Megatrends: Ten New Directions Transforming Our Lives'.

How do these impact your strategic plans? (Please tweet responses to @chriscfox)

The invention of the iPhone in 2007 has, over the past decade, facilitated an explosion in the use of social media. (Source: 10 trends for the 2020s – mallowstreet)

People are becoming increasingly concerned with how their personal data is being used, exposed and/or misused.

Some high profile cases include:

The 'gig economy' is where independent workers accept piece work, instead of holding regular jobs. It is most popularly characterised by businesses like Uber. But, it also includes a broader move towards self-employment and micro-businesses.

More recently, experts have started to conclude that the gig economy has had less impact on the economy than first imagined. (Source: How Estimates of the Gig Economy Went Wrong - WSJ)

The Internet of Things (IoT)

"As computers and connectivity become cheaper, it makes sense to bake them into more and more things that are not, in themselves, computers—from nappies and coffee machines to cows and factory robots—creating an 'internet of things', or IoT (see Technology Quarterly). It is a slow revolution that has been gathering pace for years, as computers have found their way into cars, telephones and televisions. But the transformation is about to go into overdrive. One forecast is that by 2035 the world will have a trillion connected computers, built into everything from food packaging to bridges and clothes." Source: Now the world will change as computers spread into everyday objects - Chips with everything published 12/09/2019

By 2020, there will be seven times as many connected devices on the planet as people. (Source: 2020: Preparing for a Decade of Change and Transformation)

AI encompasses a variety of different methods. AI researcher Pedro Domingos explains that there are five basic approaches to machine learning, from neural nets that mimic the brain, to support vector machines that classify different types of information and graphical models that use a more statistical approach. (Source: Four Things Every Leader Should Know About Applying Artificial Intelligence To Business – Innovation Excellence published 01/11/2018)

A platform is a business model that allows multiple participants (producers and consumers) to connect to it, interact with one another, and create and exchange value. The most successful companies in the digital era, including Alibaba, Amazon, and Facebook, were all designed on platform business models. (Source: Insurance beyond digital: The rise of ecosystems and platforms | McKinsey) Uber and  are other examples of well-known platform businesses.

An ecosystem, meanwhile, is an interconnected set of services that users to fulfil a variety of needs in one integrated experience.

(Source: Insurance beyond digital: The rise of ecosystems and platforms | McKinsey)

Since the second industrial revolution, commerce has been driven by economies of scale: standardising products and services and then flogging them to as many people as possible. (Think of the Model T Ford, available in any colour as long as it is black!)

But that is changing. Technology is allowing firms to deliver services personalised to individual customers and customised to increasingly small customer segments.

This is enabled by technologies such as Artificial Intelligence, 3D printing. AI allows firms to line about customers on an increasingly granular level, whilst 3D printing allows them to personalise products for those customers.

(Image source: 4th Industrial Revolution Will Change Companies from the Inside – Innovation Excellence)

The fourth Industrial Revolution is powered by a combination of:

BNY Mellon has described it as "the convergence of physical and digital that can create a digital feedback loop leading a specific outcome in the real world." (Source: The many faces of Industry 4.0)

The digital revolution has no boundaries or borders. It is changing behaviour and expectations as much as the tools used to deliver new services and experiences. (Source: Megatrends - Issues - PwC UK)

Some emerging economies that were growing rapidly are now in recession. Commodity prices have played a considerable role in sending these economies into reverse. (Source: Megatrends - Issues - PwC UK)

Open question: Remote working has been proven to be effective for most office workers during the COVID-19 pandemic. Will this slow or even reverse the trend towards urbanisation, particularly in the developed world?

By 2019, Generation Z will outnumber millennials, and for the first time in modern history, 5 generations will work side by side.

In 2019, for the first time, globally, people will spend more hours a day on the Internet than watching TV, consuming more content than ever before in history.

As evidenced by Brexit, Trump, and the Scottish and Catalan independence movements.

This will extend to the digital sphere:

The US has traditionally shied away from this fearing it could stifle innovation, but Europe has a freer hand and fewer local tech giants.

Over the last 25 years, more than a billion people have lifted themselves out of extreme poverty. The global poverty rate is at its lowest level in recorded history.

Global economies may be too integrated for full trade or cyberwarfare. But, escalating tension between the US and China may lead to a cold war.

We will increasingly turn to data to 'hack' our lives.

This will initially focus on:

Organisations will churn and fragment

The average age of a company listed on the S&P 500 Index has fallen from almost 60 years old in the 1950s to less than 20 years currently. Only 60 companies on the Fortune 500 list in 1955 appear on the list in 2017- fewer than 12%. The rest have either gone bankrupt, disappeared after M&A, or they still exist but have tumbled out of the top rankings. (Source: 2020: Preparing for a Decade of Change and Transformation)

The gig economy will move up the value chain. Inter-company collaboration will increase. This will fragment big corporates into smaller autonomous and collaborative ecosystems.

Old technology, like the internal combustion engine, will get smarter before it goes away. For example:

And it is not just technology. Insects have more protein than any other meat. They are lauded as an environment-friendly way to feed a growing population. Already, over 2 billion people worldwide consume insects on a regular basis for a source of protein.

From learning to doing

As the world continues to change will be a premium on life-long learning. But we will learn that learning from books is no substitute for learning by doing.

Movements like #metoo will ruthlessly seek out and expose any remaining dark corners.

COVID-19 came as a shock to many. However, the fragility of the global health system has been well understood by experts for many years.

No less than Bill Gates talks very coherently about the dangers of epidemics in this 2015 Ted Talk.

This infographic shows that the world has a long history of dealing pandemics. (Click on the image for a full-screen version) 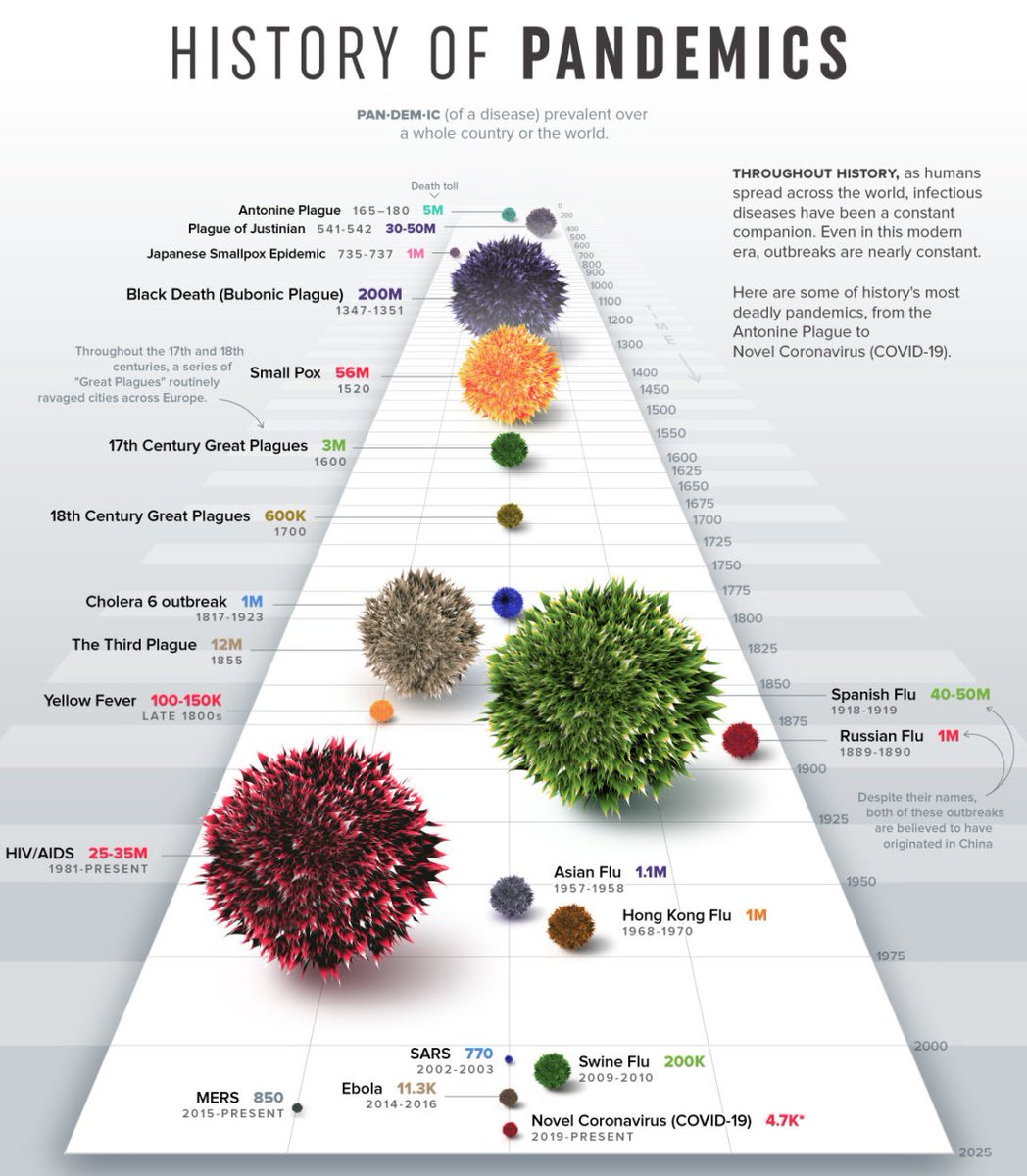 At the time of writing COVID-19 remains a live pandemic. The figure of 4.7k death shown on this chart is already well out of date. For the latest facts and figures about COVID-19, see:

The movement towards flexible working has been growing for some time. For example, in the UK in 2018, of the employed population:

(Source: Office for National Statistics.)
YouGov Profiles data shows that 40% of workers think they could do their job from home, compared to 54% who say they couldn't. Regional differences show that 48% of London’s workforce say they can complete their work remotely. This is followed closely by two areas bordering the capital, with 44% of workers in both the East and South East of England saying they capable of getting the day’s work done away from the office. (Source: Who are the Britons working from home? | YouGov published 07/04/2020)
The push towards greater adoption of flexible and remote working has been held back by deeply held views that it was not:
The COVID-19 lockdown has substantially debunked both of these objections. Forced remote work during lockdown has shown that not only is remote work possible but that for many it is better.
This is despite the fact that, for many, the experience has been less than ideal.
Some of these struggles will be temporary. Children will return to school. Other stresses will subside. People will get used to the technology. Processes will improve.
And we know from the long-term remote workers that things like 'Zoom fatigue' are neither permanent nor unavoidable.
The advantages of office environments are well understood. For example:

The COVID-19 lockdown has made illuminated, on the other hand, the many advantages of remote work:

A survey of just under 1,000 firms by the Institute of Directors (IoD) shows that:

A smaller survey of bosses whose firms had already cut workplace use suggested 44% of them thought working from home was proving "more effective". (Source: Home working here to stay, study of businesses suggests - BBC New)

A survey of 1,000 UK and US employees who have been working from home since the beginning of COVID-19 found that:

Source: 90% employees would stay with an organisation if they offer remote working - Employee Benefits published 04/09/2020

A survey conducted by the research firm Gartner reported that 75% of respondents plan to increase the number of permanent remote employees. (Source: How Working From Home Is Changing The Way We Think About Where We Live)

Another survey by the Future Strategy Club (FSC) found that:

According to a new study commissioned by Slack, data from a survey of 9,032 knowledge workers in the US, UK, France, Germany, Japan and Australia found that:

Source: Slack Found Only 12% Of Workers Want To Return To The Office Full Time; This Is Good News

If nothing else, we will gain two ways of working instead of one. More individuals will be able to choose between in-office and remote work according to their personal preferences and styles, rather than almost everyone being forced into in-office work whether it suited them or not.

This reconfiguration of work will also provide an opportunity to address some of the toxic meeting cultures found in many organisations.

Simply replicating in-office behaviours and processes into remote environments will reduce, instead of increasing productivity, and lead to more stress instead of less. (See The 5 levels of remote work - and why you're probably at number 2.)

Source: The Deloitte Global Millennial Survey 2020
One big loser in this is likely to be commercial office real estate. Excess capacity may be:

Research from the Recruitment and Employment Confederation and labour market analysts Emsi Burning Glass show that 25% of jobs advertised in December last year mentioned hybrid or flexible working, which also includes job shares and working irregular hours. That's up from 19% before the pandemic.

According to PricewaterhouseCoopers' (PwC) Executive Views on Business in 2022 Pulse Survey published on Thursday, 43% of business leaders plan to keep hybrid work options for employees, and 30% plan on making remote work a permanent option. (Source: Remote working is here to stay as managers try to keep staff loyal | ZDNet published 28/01/2022)

According to our study, early in the first lockdown, about

Source: What does 2022 have in store for hybrid working?

However, this change is not without its risks:

Almost 50% of IT leaders say their organisation’s cyber security isn’t good enough for remote working, according to a recent study in Business Leader. (Source: What does 2022 have in store for hybrid working?)

Governments have used things like COVID-19 to increase their role in ordinary civilians lives.

You can create, execute and optionally publish your own strategy plan for free at StratNavApp.com.